Update 1 on Team Kiribati Trip to the Worlds

Even though they didn’t show it, the excitement and apprehension about flying for the first time was very high when the team commenced the journey from CXI to Launceston on 13th November.

As all frequent visitors who fly from Brisbane know, there is an overnight stopover Fiji to make the connecting flight to Brisbane at about 8pm the following night. To fill in time, they were taken to the Harbour Development for a look around and a cool drink. TK was later found taking a nap in the only available space he could find in the day room which was on the floor under the luggage bench. 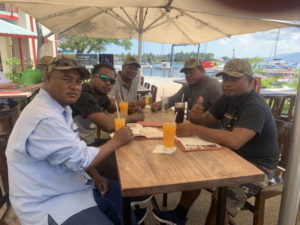 They arrived at a friends house for the overnight stay, and were up early to enjoy the surroundings and a hearty breakfast of bacon, eggs, sausages and toast. Their bags of gear for the trip were collected and checked to make sure it all fitted. Thankfully there was only one issue with a pair of sneakers so a quick trip to the shops rectified the problem. There a good deal spotted on a ukulele to replace the one belonging to Eketi which had seen better days. 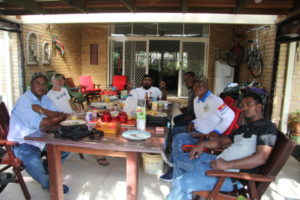 We arrived in Launceston at about 5.30pm on Friday 15th, collected a hire car and headed to our accommodation at Penstock Lagoon that was kindly donated by Malcolm Crosse and Nick Bowden. This would be their base for the 2 weeks training period before the competition proper. On the jour-ney, they were greeting by snow and sleet so needless to say the fireplace was a very popular. Alfie Kither, who would be taking care of the catering and cooking for the team’s stay, had arrived a cou-ple of days earlier and had a hearty hot meal waiting for the team when they arrived.

Saturday 16th saw us back down in Launceston for a competition promotional event. This was also an opportunity to collect the Echo rods sponsored by Mike Stevens of Essential Flyfisher and their Orvis waders , boots and vests sponsored by Andy Summers of Mayfly Tackle

Sunday 17th— Jim Williams and Peter Woods who would be organizing the training, had the team rigged up and in the cars again this time headed to Brumby’s Creek for some practice on Czeck nymphing, nymph under dry and dry fly fishing. These guys have no problem casting however the brakes had to be a applied on a few occasions until they realized that they didn’t have to cast 80-feet. They all adapted well to the new techniques and caught fish.
Monday 18th— Steve Crowley and Gary Mead supplied their boats and met the team at Arthurs Lake for training pulling wet flies. Again, they all caught fish and kept some for the evening meal.

The daily routine to date has been governed by weather. It has been unusually windy and cold so the locations and activities are changed daily to accommodate the conditions. Jim Williams selects the locations and when it is too windy on the highlands, the team moves off the high country and fishes the rivers. Generally it is breakfast at 7am, make lunches from the prepared materials and in the cars by 8am and travel to the selected location. Fortunately, we don’t have to teach them to cast as they can all cast into a 10 knot headwind with either hand. Consequently, it is just the different techniques that are getting the attention.
This time, we are far better prepared than at the Commonwealth Championship in 2012. The team is well equipped and is getting the appropriate intense preliminary coaching from Jim and Peter. This is not just a holiday for them. They are working hard to achieve the best result possible. Consequently, with these plans we have in place, we are confident that the team will do well and make their country proud f their effort.

Alfie Kither, our chef for the teams stay during the 2 weeks prior to the competition, drove down from the Sunshine Coast and has been doing a great job. So great, that I’m concerned that none of the clothes will fit by the time they go home. Fresh bread rolls daily, scones and cream, lamingtons, cup cakes, chocolate chip muffins and not to mention the roast dinners, stews and curries. In recognition for his work we let him out of the kitchen occasionally to have a fish and he caught his first brown trout on fly.

All this would not have been possible without the generosity of Tasmanians. Dr Robert Simpson for eskies full of venison, lamb and chicken and Bruce Jordan for the copious quantities of vegetables. I know there were others who I don’t know who also donated goods. I, on behalf of all the team, sin-cerely thank everybody who has helped.

Saturday 30th— We leave Penstock for our accommodation in Launceston. The team draw and briefing in on Sunday and the competition proper commences on Monday. The venues are 2 rivers on foot and 3 lakes out of boats and each team member rotates through each location on a daily basis. Each session is 3 hours duration. The big killer is that all the teams who fish the lakes will probably spend about 4 hours daily in buses

For Information on the Championship – https://www.wffc2019.com
Contact me by phone or email for more information
Contact: NIAL LOGAN Phone in Aust: 0417 426 282
Email: niall@learntoflyfish.net Web: www.learntoflyfish.net