Trips during this years block booked period of July and August received glowing reports on both the fishing and the services provided at the Villages Lodge. After all the turmoil with the appointment of a new head guide in late 2018 then the sudden loss of Shimano, Bob as new head guide with Beia as his deputy, have stepped up and are doing a great job in organising the guide rosters and the daily fishing activities. This together with the hard working staff who keep everybody well fed, those who service the rooms and those who tend to the thirsts at night are ensuring that The Villages is building on its reputation as the premier lodge to visit on Kiritimati.

As the result of some issues last year, we decided this year to have either Andy Vockler or myself present for the whole 8 week period to make sure everything ran smoothly. These issues usually arise when there are inexperienced group leaders who unaware of the island system and consequently have problems with resolving situations to everybody’s satisfaction.

In July, I had the pleasure of being at the Villages for the entire month looking after 4 different groups of anglers. The best part was being there for the entire month and fishing through a full moon cycle. Over the month all of the fisherman caught plenty of great fish. This year saw lots of good sized bonefish with plenty caught in the 3–6lb. range,a good number of 7lb. fish were caught as well and of course there we plenty of stories of the one that got away.

Our guides worked tirelessly making sure all clients were fully satisfied at the end of each day. Another pleasing aspect for me was the advancement of our younger “trainee” guides, all of them are developing into fine guides, they do themselves, their families and the Villages proud. Great reports and feedback was received about them all from the anglers.

Over the full moon we fished the Paris Flat bonefish aggregation. I don’t think I can recall seeing so many big bonefish in the one spot. Massive schools of fish!! The surprising thing for me was that they were also swimming on the surface. Fast stripped flies would see 6 and 7 lb. bonefish peel off and chase the fly down like little tunas, very visual and a lot of fun. Over the neap tides we fished for shallow water bonefish and trigger fish. Once again lots were caught and as always plenty were lost for various reasons.

A few groups fished the Korean wreck on several occasions for a good variety of solid bonefish, triggers, bluefin and GT. One memorable capture down there was from Marty, an angler from Tassie who managed a very good barracuda on a clouser. Lucky he hooked it in the side of the jaw as he wasn’t fishing with any wire trace. Milkfish were always available just outside the lagoon during the early mornings on the run out tides. As is always the case with milkfish, thousands of casts were made over the weeks with a total of 6 fish landed, that’s milkfishing!! The GT’s were plentiful throughout the month with some great fish caught on Orvis, Nine Mile, Smokey and up around the backcountry. Throughout the month we were blessed with fabulous weather with only a couple of days lost to heavy cloud. I can’t wait to do it all again next year!!

The fishing was much the same as in Andy’s report with plenty of bonefish and the inevitable tales of lost triggers. Late one afternoon, one of the groups encountered a feeding mayhem by a pack of GT”s, estimated in excess of 50, creating mayhem on a large baitball near Orvis Flat. They managed to pull 3 or 4 up to about 40lb out of it and reported that there were some huge specimens that refused the flies. Needless to say they came back to the lodge a bit shell shocked. The last 2 weeks of the month saw an increase in the wind speed to about 30-40 km per hour for close to 24 hours a day. Needless to say a lot of the popular flats on the far side of the lagoon and close to the lodge were unfishable due to the stirred up sand resulting in cloudy water. Consequently, areas at the back of the lagoon, the backcountry and nine mile flat area were the only opinions to find clear water. It takes longer to get there but the fishing justified the extra time on the boat to get there.

Another 9 young potential guides underwent a week of training. It is a necessity to keep the “production line” going to ensure there is a full quota of trained competent guides available. It takes a 3 year apprentership  before they are classified as a fully qualified guide. The training involved setting up the gear, knots, learning to cast both right and left hand, some simple fly tying and a days fishing where they were given pointers to casting to fish, stripping, fighting, landing and handling the fish to ensure a healthy release. It still amazes me how quickly they pick up the basics of casting. The ones showing potential and who have a reasonable grasp of English are referred onto the head guide for further evaluation and on the job training. It’s rewarding to see the the trainees for the last few years doing so well, getting good reports and enjoying their work.

The king of the kids. Colin Merriman had been helping out the preschool with printer, ink and a supply of paper to assist the teachers with their lessons. In appreciation, they performed some traditional dances as well as providing lunch. 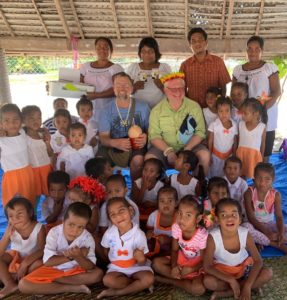 Some Photos from this Year 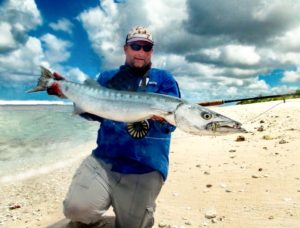 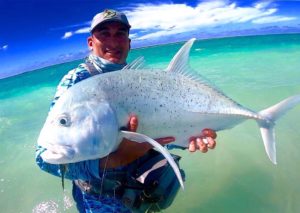 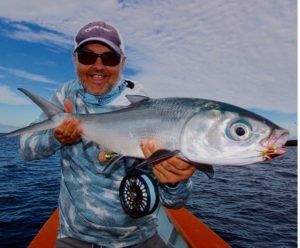 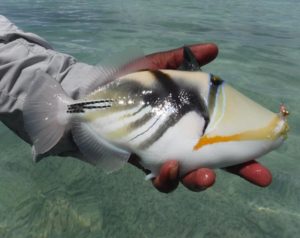 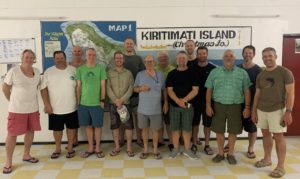 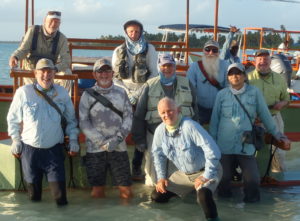 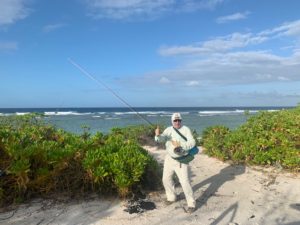 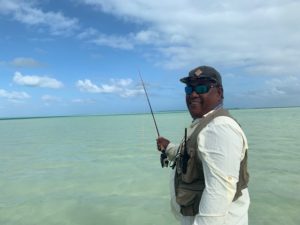