Update 3 on Team Kiribati trip to the WFFC

The weather continues to play havoc with the teams fishing the highland lakes. The exposure of Little Pine Lagoon has meant some”surf like” conditions at the boat ramp. This meant that the only place that could be comfortably fished was on the lee side of the hill opposite the ramp. All teams found the fishing tough as the winds stirred up the shallow water. 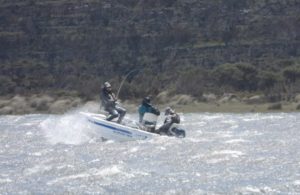 This is an area near Penstock Lagoon on Thursday morning that shows deer in a paddock blanketed with snow. 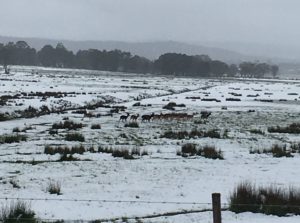 Wednesday saw the team still holding 22nd position in front of Wales. Some really tough beat allocations and fishing saw a couple of the team members draw blanks on Thursday. They weren’t the only ones as some of the more fancied teams members also caught zero for the session. This is to be expected late in the competition due to the same pieces of water being fished on a daily basis. Yesterdays result saw them slide down the list to below Wales.

Today, Friday is the last day of competition. Reports have filtered through that there was again snow last night but the wind speed had dropped marginally. The team arrived home in good spirits as they all caught fish which made a huge impact on the standings. Session standings  for the day were Kiribati 13, Poland 14, Belgium 15, South Africa 16, Netherland 17, Luxenberg 18, Canada 19, Mongolia 20, Wales 21 and Japan 22.

The standings for the competition are the top 3 are France 1st, Czeck Republic 2nd and Spain 3rd with Australia finishing 7th just in front of England at 8th. Kirbati finished at 19th followed by Japan at 20, Mongolia at 21st and Wales at 22nd. Individually for the competition, the finishing order was Eketi 86th, Beia 87th, TK 89th, Menty 93rd and Taatoa 99th out of 114 fishing. If they had been a bit luckier on the tough days when fish were lost, their standings would have been a lot higher……but that’s fishing.

Taking all things into account though, this has been a spectacular effort on their part considering that they have never fished for trout. An even greater effort when the harsh daily weather conditions that they have never had to endure previously are taken into account. There was never a complaint and they stood up ready to go fishing every day. They have done themselves and their country proud with the dedication they have put in.  I think their sentiments can be summed up in a statement made by TK, “I have always wanted to see snow, now that I have, I don’t want to see it again”.

Saturday night is the award presentation dinner and we fly back to Brisbane on Monday at 4pm. They head back to CXI on Tuesday.  This means that there will be some free time on Saturday and Sunday so no doubt there will be a bit of retail therapy at Kmart and Target before heading home.

Due credit for their success has to go to Jim Williams for passing on his knowledge from previous competitions and Peter Woods for the production of the location specific flies. It also would not have been possible without the support of the sponsors and the “friends of CXI” who donated cash to make it happen. On behalf of the team, I would like to thank you one and all.